Behind the Scenes... of a Y11 Drama workshop

Grace F (Y11) takes us behind the scenes of a recent Drama workshop in which visiting actor, Mike Southern (currently starring as Sammy in Blood Brothers), worked with students to help develop their understanding of the play.

On Wednesday, 27 April our Drama class (Year 11s) had the honour of attending a workshop run by Mike Southern, the actor of Sammy in Blood Brothers, the text GCSE drama students study.

We began with ensemble work, a piece where the characters are aged 7-10, playing a classic game of 'Cowboys and Indians'. The scene was fast-paced and incredibly interesting to get into the mind of a child again and just run about having fun before the dialogue even began (this did mean we got to play around with our uniform to help us get into the rebellious child spirit!). Despite only using three students for the named characters - Mickey (Lewis B), Sammy (Harley B) and Linda (Abigail M) - Mike ensured there was still fun to be had in the ensemble, adding little moments of personality such as a single student pointing upwards at the mention of ‘hell’, or another rushing round the front with the idea to ‘fight’ before the chant began.

After successfully running through the scene, we all settled down and had a go at all three of the duologues that could come up in the 2022 exam. 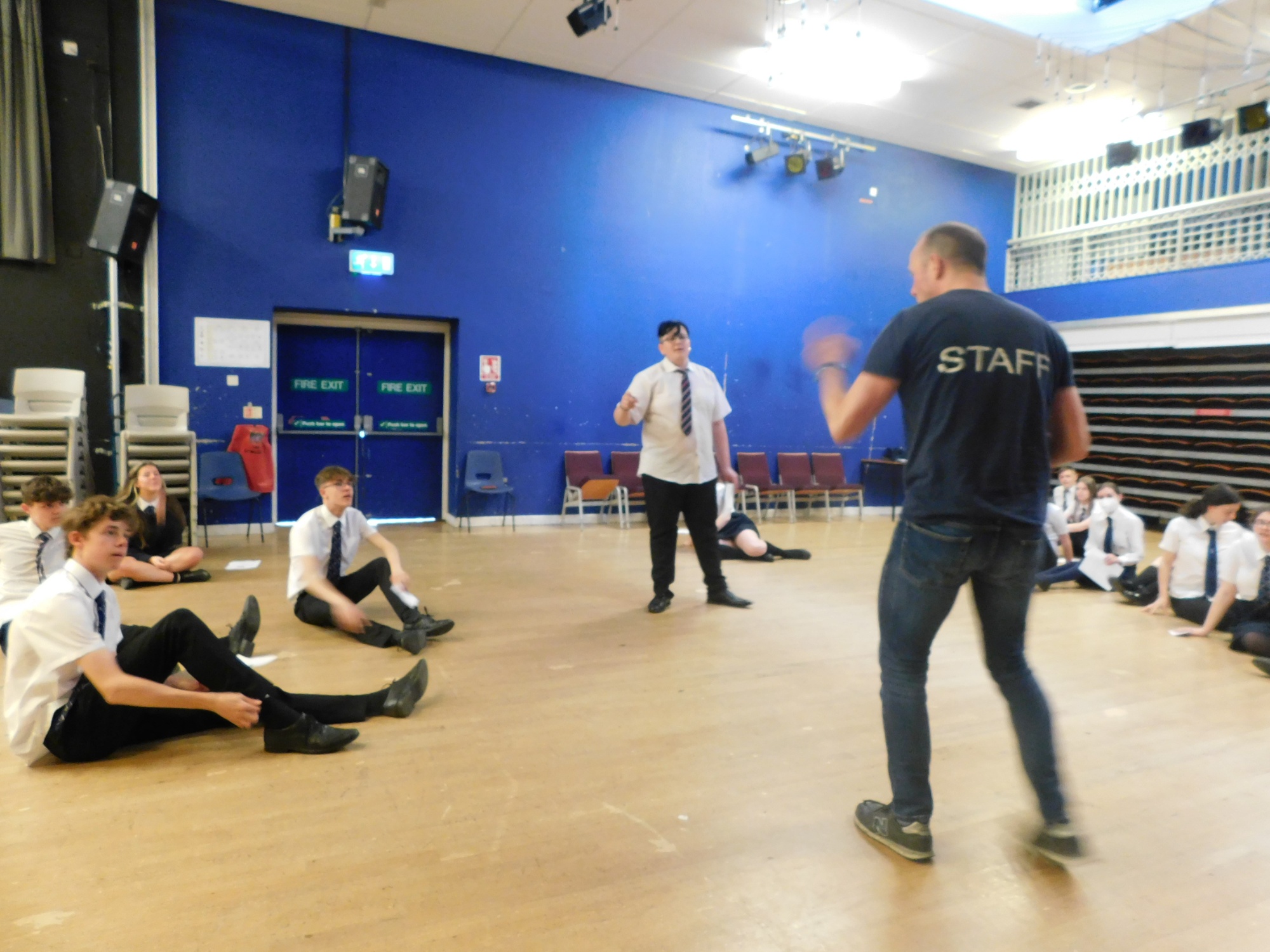 Firstly, there was Gemma E (Mrs Lyons) and Eden H (Edward) who performed the scene of the interaction that occurred after Edward had been suspended for refusing to give up his locket. Out of all three scenes this was the only one that did not have significant comedic undertones. However, Gemma and Eden performed exceptionally well. Gemma especially, with her noteworthy performance of Mrs L, perfectly encapsulated the growing paranoia of her character. Even the simple things such as a mere shake of the hands and the dropping of the face all coupled together made the difficult to play Mrs L look natural on her.

“It was an incredible experience, and Mike was really helpful in getting into the minds of our characters, making us think things about them that we hadn’t before. Overall a great workshop!”

The second scene was of Mia B (Linda) and Harry L (Mickey) who performed the crossing the field scene in which Linda is trying to flirt with Mickey in an attempt to get him to acknowledge his feelings for her. A fan favourite amongst the class, Mia managed to completely nail the comedic timing required for her character of Linda, a flirty character who pretended to get her foot stuck in order to get Mickey closer to her. Everything was amazing, from the flirtatious tone to the way she moved, had the class truly believing she was hobbling over a field in high heels trying to impress her crush.

“Mike changed completely how I viewed the scene, he made Mickey, who I initially hadn’t seen as having such a comedic awkwardness, become an easier character to play by giving us ideas on how to add comedy in Mickey’s idiosyncrasies and mannerisms.”

Finally, Charlie S (Mickey) and Aaron G (Edward) performed the third and final scene of the two main characters, the ‘Blood Brothers’, reuniting at 14 after not seeing the other for 7 years. Ever expressive, Charlie wonderfully nailed Mickey’s awkwardness slipping back into the hyperactive 7 year old Mickey had been when he had last seen Edward. Yet another hilarious-made scene, the boys nailed each of their characters’ different comedic mannerisms and ended the workshop with a bang!

“I really enjoyed the chance to perform as Edward, a character I wouldn’t normally have chosen to play in that particular scene. It was overall a really fun few hours and Mike was an amazing director who helped loads!”

Overall the day was a huge success and Mike from Stage Ed was a joy to be directed by. He made the experience an unforgettable one with loads of laughs and funny moments. A point of particular note was when he attempted to teach us the Liverpool accent which ended with us doing a fairly decent job when talking about Kentucky Fried Chicken and Curly Whirlys!